So apparently when I post from my phone I get these CRAZY BIG pictures up loaded…. Sorry about that if it annoyed you to see it even half as much as it annoyed me to open…. Maybe someday I’ll figure out how to work this blogging thing.

By the way… Zoe says hi. This is a throwback to her sweet innocent puppy-ness from about 8 months ago…

A few months ago my husband bought a quilting machine for me! Woo Hoo happy day!!! It’s a “Top of the Line 18 inch longarm quilting machine with a  Grace Majestic Frame”. After some research, I’ve figured out that it’s basically a Tin Lizzie 18 that the company I purchased it from modifies and sells from their site.  I picked it up for a fairly reasonable rate, andI really love it to pieces, but I have had a few issues that I wanted to document here in case anyone out there buys one and has the same problems.

it was delivered in two separate shipments, as the machine itself has to go to a warehouse for it’s “upgrade” (which appeared to consist of new nifty U-shaped foam handles and a set of controls so that you can run the machine from the front or the back).  The first parts that came was the frame and the carriage.  It took my husband and I most of the morning to put the frame together. The instructions were relatively easy to follow, and we put it together with minimal arguments and cursing! We did run into a problem attaching the brackets that support the ends, as the brackets were obviously added afterward as an improvement to the frame. The screws that came with them were not made for the extra width of metal and barely secured the brackets into the end pieces. A trip to the hardware store for some longer screws, and we were in business! This frame comes with  adjustable legs so that even tall people like myself don’t feel that  we’re becoming hunchbacked, and the feet also twist up and down for easy adjustments if the floor isn’t level. It has an extra bar to hold the batting, a table on the back to hold paper pantographs and is fully metal and very sturdy. The bars have a slot in them that runs the length of the metal, and you attach your leaders by pushing a plastic tube in the slot with the fabric to hold it in place. It works pretty great, but will slide back and forth, so I find I have to check if it’s centered very frequently when I load it or while I’m quilting. I suppose I could tape the ends or something, but I’m not ready to ugly it up yet… It’s still shiny and new, lol!

The other part that came with the first shipment was the carriage. It comes with a standard carriage so that you can use your home sewing machine on the frame and you don’t have to purchase a longarm machine. It will hold up to an 18 inch machine, and I can use it with my Brother PQ1500S if I were so inclined. It has four wheels that run incredibly smoothly on the track…. Like Buttah 🙂   The only issue that I would notice if I used my home machine is quilting space. My Brother has a 9 inch harp space (the space from the needle to the machine) and by the time you got a quilt loaded and rolled on the bar, you probably would only have 4-6 inches in which to quilt before you had to advance the frame. Not the end of the world and definitely faster than quilting on your domestic machine alone, but still annoying.

About 1 week later, the machine arrived. It was white and pretty and oh so big! If you’ve never been next to a longarm machine, let me tell you how intimidating they are… You kind of feel like it could easily take you DOWN  a peg or two! Also, they are heavy. I’m sure she weighs at least 40 pounds and you can definitely feel it as you move it around. The machine comes with the U-shaped handles that you have attach yourself as well as the rear handlebars, the cover to the belts, the thread holder and the stitch regulator. I’m told all that went just fine, but I was at work and missed out on this part. One of the early problems came with attaching the machine to the carriage. The holes on the carriage were too small for the machine, so my husband had to take it to his shop and grind out the holes about 1/2 inch each to make them fit. Also, the screws for the stitch regulator were too short so my husband went and got longer screws and extra nylon nuts because they didn’t send enough. Another thing to watch out for is the instructions. I am the type of person who likes step by step instructions, and you definitely don’t get that here. The booklet they send you is obviously meant for more than one type of machine and is very generalized. The pictures don’t match what the controls actually look like, so if you are trying to figure out how to use your stitch regulator, it refers to it as Lizzie stitch, and the control calls it Auto…. confusing stuff if you’ve never touched a longarm in your life. Anyway, after a few you-tube videos, I was ready to go!

After I got the machine loaded with some practice fabric, off I went. OH MY GOSH longarm quilting is HELLA FUN. I’m cruising along, having a grand old time and then……. the machine stutters and starts making long stitches. Sometimes it doesn’t raise the needle like it should, or put it down when at rest- it’ll stop halfway. The motor starts to race and stitch tiny stitches even though the regulator is set for 5 stitches per inch.  The machine beeps at me and displays a “Motor Sensor Error” message on it’s control pad. I panic and yell for my husband, (who has been banished from the room because he wants to play too and all that comes out of my mouth is MINE!!! like a two year old, but I digress….) We rethread the machine check the oil, reload the bobbin, check that it’s all level and do everything we can think of. When I try again, sometimes it works perfectly for hours and then all of a sudden it stops, and sometimes it just won’t work at all. Finally, I call the company I purchased it from.

I live in Kentucky, and the store I purchased for is Sewing Machines Plus, which is based in California. This creates a time issue- they only have service technicians available from 1pm- 8pm my time (or something like that) and only on weekdays. And of course all this happens on a weekend, so….I wait. And I’m annoyed. And frustrated. After what seems like a million calls, (I’m sure it was only 4 or 5, but it seemed like a million) I finally got a service person. He gave me directions on how to use the control pad to diagnose it- nothing there. He told me to buy compressed air to clean off the sensor- no help.  We went through a dozen other things that he said should help, and guess what? The darn thing didn’t act up while I was on the phone. Not. One. Time. So I was told to call back if it keeps up and they’ll keep trying to help me fix it. Ugh. I know nothing is better, but as long as the machine acts like a lady, I’ll keep trying to quilt on her. She kept up her sporadic misbehaving, so after a few more calls that did not fix any of the issues, I decided to send her back to the company. However, my husband did not want them to send me the same machine as he was convinced there was something very wrong with her. In addition to the problems described above, she was also VERY loud, and when you used the manual hand crank, she made some creepy noises…. The company agreed to send a machine to me as soon as they got shipping notification on my machine to ensure I did not get the same one.

About a week later, the new one came. We got her all hooked up and she was sewing like a dream, she was so much quieter, and didn’t make that creepy noise when you manually moved the needle… until today. The machine started doing THE EXACT SAME THING! As I was trying to figure out what was going on, I had my husband come up and look too. My husband stood in front of the window and moved the machine, and it behaved. When my husband moved from the window, the machine acted up. It turns out that the machine sensor can’t handle direct sunlight, since it’s directly in front of a window that is only occasionally open, It took me this long to figure it out! If I keep the blinds shut I have no problem, but if I open them the machine stops working while the sunlight hits the sensor.

So this long long post is meant as a Public Service Announcement: If you start having strange things happen on your Tin Lizzie knockoff machine, IT MAY BE ALLERGIC TO LIGHT! Such a strange thing to mess up the electronics, huh? I just wish the service technician had known it was possible because it would have saved me a lot of tears, time and heartache.

If you’ve made it this far into this loooonnnggg post,  you deserve a picture or three: 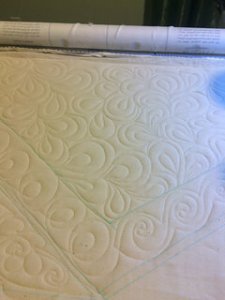 Thanks for taking the time to read all this. Have a great day!